Sen. Manchin supports voting bill if changes are made 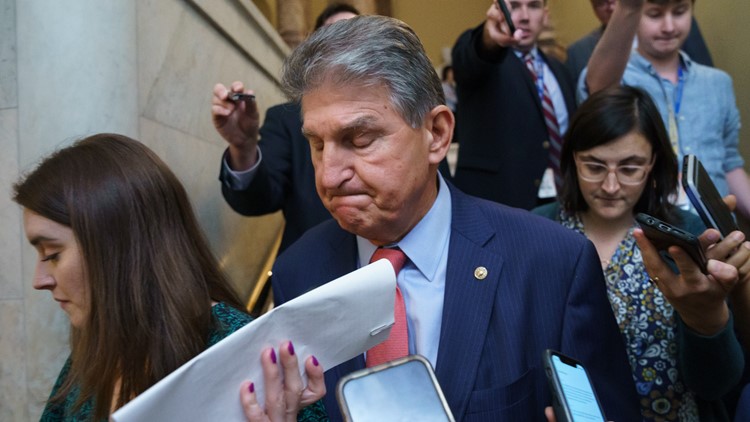 WASHINGTON — Sen. Joe Manchin is proposing an extensive list of changes to his party’s sweeping elections and voting bill, raising hopes among Democrats that they could unite behind the legislation even if the measure is nearly certain to be blocked by Republicans in a showdown Senate vote next week.

Manchin, a West Virginia moderate, said he’s now open to supporting a bill if it’s revised, despite declaring earlier this month that the measure was the “wrong piece of legislation to bring our country together.”

He released a proposed list of changes ahead of a meeting of Senate Democrats Thursday to discuss the path forward. That meeting was called by Senate Majority Leader Chuck Schumer, who is vowing to hold a vote on the bill in June no matter what, saying “we have to get it done.”

“People were assuming that I was against (the bill) because there were no Republicans supporting it. It’s not the case at all,” Manchin told reporters at the Capitol.

However, he added, “You should not pass any type of a voter bill in the most divisive time in our life unless you have some unity on this thing because you’ll just divide the country further.” Manchin said he was “not confident” other Democrats would agree to his proposed changes.

Manchin’s overture comes as Democrats struggle to counteract state-level Republican efforts to restrict voting following Donald Trump’s false claims about a stolen 2020 election. Even if Manchin is brought onboard, the voting bill stands little chance of becoming law. Manchin and other Democrats remain opposed to changes in Senate rules that would be needed to overcome a Republican filibuster.

As written, the Democrats’ bill would bring about the largest overhaul of U.S. voting in a generation, touching nearly every aspect of the electoral process. It would remove hurdles to voting erected in the name of election security, like voter ID laws, while curtailing the influence of big money in politics. It would create a nonpartisan process for redrawing congressional districts, expand mail voting and early voting, restore the rights of felons to cast a ballot, and scores of other provisions.

Manchin’s revisions would curtail, rewrite or eliminate many aspects of the bill. He favors a national voter ID requirement where voters could show a utility bill or another identifying document to vote, while Democrats have sought to blunt the the impact of strict state voter ID laws. His proposal leaves out the creation of a public financing system for congressional campaigns and would allow for greater limits on mail voting.

He has also called for changes to a section on the bill that would create nonpartisan commissions to redraw congressional maps. Manchin, instead, has proposed the use of computer models to prevent partisan gerrymandering.

Yet his list would also leave sizable portions intact or with limited changes, including automatic voter registration, making Election Day a holiday and mandating 15 days of early voting.

Sen. Raphael Warnock, of Georgia, told reporters the proposal was a “way in which we stay engaged on the issue.” He said he was less troubled by Manchin’s support for voter ID laws than “these terrible partisan political maneuvers” by Republican state lawmakers, including in Georgia, where the GOP-controlled legislature can now remove local elections officials they object to.

“As Sen. Manchin has said, ‘Inaction is not an option,’” said Rep. John Sarbanes, D-Md., who sponsored a version of the legislation approved by the House.

Fred Wertheimer, a longtime good government activist who helped write the initial bill, called it “progress” and said Democrats were “now in a totally different place than we were 24 hours ago.”

Manchin’s evolving position comes as he has faced tremendous pressure from Democrats, including those in Congress. The group End Citizens’ United is running a $30 million campaign to build support for the effort, which includes ads running in his home state.

House Speaker Nancy Pelosi had several conversations with Manchin about the bill over the weekend. And President Joe Biden said earlier this month during a speech in Tulsa, Oklahoma, that he would “fight like heck” to pass the bill.

Still, the White House has largely let Democrats on Capitol Hill take the lead on negotiations around the legislation, and it’s not clear if Biden would support the compromise Manchin has proposed. The White House did not respond to a request for comment on the latest developments.

As the fight in Congress drags on, the Biden administration is taking steps to address voting at the state level.

Attorney General Merrick Garland delivered a speech last week that described ways in which the Justice Department would step up its efforts to protect voting rights. Garland said the department would double the number of voter enfranchisement lawyers in the Civil Rights Division and focus more closely on new voting laws for possible discrimination.

Biden also tasked Vice President Kamala Harris with taking the lead on the issue. This week she ramped up her focus on voting rights.

“The right to vote is a given,” Harris said during a meeting Wednesday with Texas Democrats who helped block a GOP-backed voting law in the state legislature. “What we are seeing are examples of an attempt to interfere with that right, an attempt to marginalize and take from people a right that has already been given.”