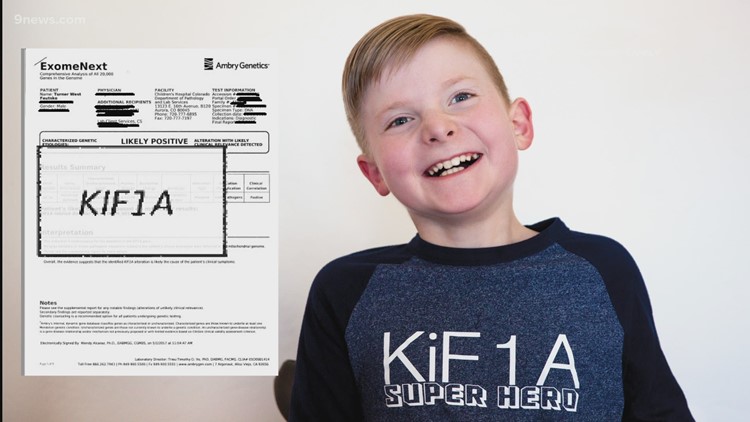 It wasn’t until a genetic test came back positive for a mutation in the KIF1A gene, that the Fautsko’s knew why Turner had cerebral palsy symptoms.

The 11-year-old lets people know what he loves with a gigantic smile, and he shows excitement by shaking his head back and forth.

“He gives most of his answers with facial expressions,” said his mom, Jenni Fautsko.

Jenni and Matt communicate with their son different than most, but for them it’s normal.

Turner uses a wheelchair because of his extremely tight muscles, and he only has a few words in his vocabulary. He has had the symptoms of cerebral palsy since he was a baby, but doctors never knew why until a few years ago.

“We had a neurologist that was adamant that we needed the genetic testing and she helped us keep on it, and finally got it approved by insurance,” said Jenni. “It took that long, 5-7 years to get it approved and done.”

That genetic test showed Turner had a mutation of the gene, KIF1A which causes KIF1A Associated Neurological Disorder (KAND). According to KIF1A.Org, less than 300 people worldwide have been diagnosed with this disorder. Jennie and Matt only know of three Coloradans.

There’s still no treatment or cure though, but now that the Fautsko’s know what Turner has, they know where to start their fight.

Matt said Turner chose him and Jennie as parents and “since he chose us we can get through the challenges that he’s presented.”

“This is the life he’s always had and he’s so happy,” said Jennie, tearing up. “He’s so happy with it. And you know just makes the best out of everything and he just brings light to everyone he meets.”

RELATED: Their 12-year-old has childhood ‘Alzheimer’s.’ $3 million is their only hope for saving him.

Subscribe to our daily 9NEWSLETTER for top stories from 9NEWS curated daily just for you. Get content and information right now for can’t-miss stories, Next and Broncos content, weather and more delivered right to your inbox.

Why Bernie’s not sweating White Ho...