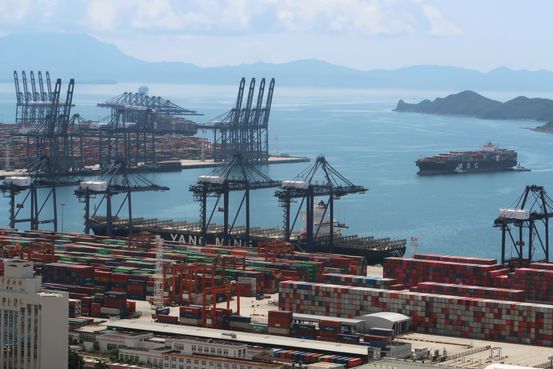 Shipping executives say around 50 container ships remain backed up around the Yantian port in Southern China and that some 350,000 loaded containers are stacked up on docks as the major gateway for China goods heading to Western nations struggles to recover from a Covid-19 outbreak that disrupted operations there.

The ship bottlenecks began in late May when a coronavirus outbreak forced authorities to shut down parts of Guangdong province, which is home to Yantian, one of the world’s busiest ports and a major gateway for containerized exports like electronics, furniture, home appliances and car parts.

Officials at Yantian say cargo-hauling operations that normally handle about 36,000 containers a day are back to 70% of capacity, from 30% earlier this month. But the vessel queue is so long that liner operators are diverting their ships to nearby ports that are also swamped with containers.

Top news and in-depth analysis on the world of logistics, from supply chain to transport and technology.

“Clearing the big pile of backlogged export cargo from Yantian will be a challenge,” said

Chief Executive of Denmark-based Vespucci Maritime. “We are coming into peak season with a serious capacity crunch and clearing the backlog will require ships to be diverted away from other ports in Asia, but there are not enough ships available.”

, the world’s fifth-largest container operator in terms of capacity, according to marine data provider Alphaliner, said there are around 50 ships waiting to call in at Yantian, down from 70 last week.

“The queue of ships is easing, but everybody is still trotting to berth,” said company spokesman

“Capacity will stay tight into the fourth quarter and this could affect the year-end shopping season and put more pressure on freight rates.”

The logjam is the latest in a series of disruptions that have battered supply chains around the world this year, leading to shortages of everything from raw materials to consumer goods, raising costs for manufacturers and retailers and undercutting attempts by companies to capitalize on resurgent demand in Western economies.

The weeklong blockage of the Suez Canal in March caused by a grounded container ship pushed back deliveries of roughly 250,000 containers by around a month.

Ship backups are still hobbling transport through California’s ports of Los Angeles and Long Beach, which make up the biggest gateway in the U.S. for Asia imports. A bottleneck offshore has eased since the first quarter, with nine container ships waiting for berthing space over the June 19 weekend, down from a high of around 40 in the first quarter, according to the Marine Exchange of Southern California. But shipping companies and their customers report growing delays in getting goods moved inland because of congestion and freight equipment shortages.

Demand for boxships is mainly driven by Western retailers such as

that have been scrambling to restock after a year of supply-chain disruptions from the pandemic.

At Palmer & Purchase, a boutique women’s clothing and accessories shop in Rye, N.Y., owner Abbie Durkin is trying to ensure that the winter line comes in before the holidays.

“It will be a race to get a full range of merchandise by Christmas,” she said.

The congestion is driving up costs for shipping customers as they jockey for space and see goods stuck in overstuffed distribution channels. The price to ship a 40-foot sea container from China to U.S. West Coast ports was quoted last Friday at $6,614, 57% higher than the start of the year and 386% more than January last year, according to the Freightos Baltic Index.

“It’s been havoc for transportation and logistics,” said Jay Duehring, who manages logistics and trade for Specialized Bicycle Components Inc., a California-based company that imports about 1 million bikes annually. “Our cost of transport has tripled from last year and delivery times have doubled to almost two months. With the peak season starting, the rest of the year will be extremely challenging, especially after the Yantian disruption.”

Hapag-Lloyd and other big container ship operators, including Denmark’s

A/S and France’s CMA CGM SA, expect the peak season of year-end imports to be in full swing at the beginning of July instead of August, which is the case during normal years.

“It’s a crisis of excessively high demand and a severe shortage of supply of vessel space and empty containers,” said Alan Murphy, CEO of Denmark-based marine consulting firm Sea Intelligence ApS. “Any type of disruption like Yantian can create a lot of mess for an extended period so don’t be surprised if your Christmas shopping list comes out short.”