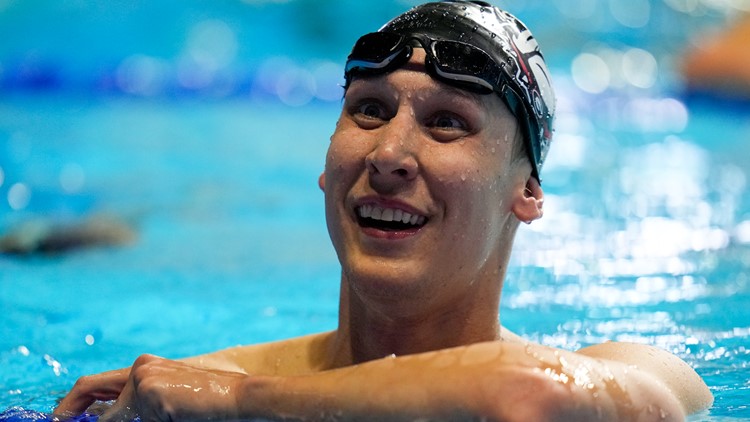 Cheered on by Michael Phelps, Kalisz trailed top qualifier Carson Foster at the midway point of the race before surging to the lead in the 400-meter medley.

OMAHA, Neb — With Michael Phelps cheering on his former training partner, Chase Kalisz claimed another trip to the Olympics by winning the 400-meter individual medley on the opening night of the U.S. swimming trials Sunday.

Kalisz trailed top qualifier Carson Foster at the midway point of the race after the butterfly and backstroke legs.

But Kalisz surged to the lead on the breaststroke and held it to the end through the freestyle, winning in 4 minutes, 9.09 seconds.

“I know where I need to be to make my move off the breaststroke,” the 27-year-old said.

As Kalisz climbed out of the temporary pool, a masked-up Phelps was there to greet him with an embrace.

Another 2016 Olympian, Jay Litherland, tracked down Foster over the final 25 meters to claim the expected second spot on the Olympic team in 4:10.33.

That ensured a couple of veterans were the first swimmers to claim spots on the squad that will head to the pandemic-delayed Tokyo Games with high expectations.

Kalisz took the silver in the 400 IM at the Rio Olympics, while Litherland finished fifth in that event.

Kalisz swam over to give Litherland a hug after seeing they finished 1-2. They both attended the University of Georgia.

“It means the world to have my training partner with me,” Kalisz said.

The pandemic-delayed Olympics turned out to be a blessing for Kalisz, who didn’t even qualify for the final of the 400 IM at the 2019 world championships. He was battling a shoulder injury and clearly not at full strength.

An extra year of training was just what he needed before taking on the grueling 400 IM at the trials.

“I would definitely say so,” Kalisz said. “I don’t want to say I wasn’t prepared last year, because I was. But I’m 27 now. My body needs rest a lot more than it ever has.”

US companies desperate to reopen a...