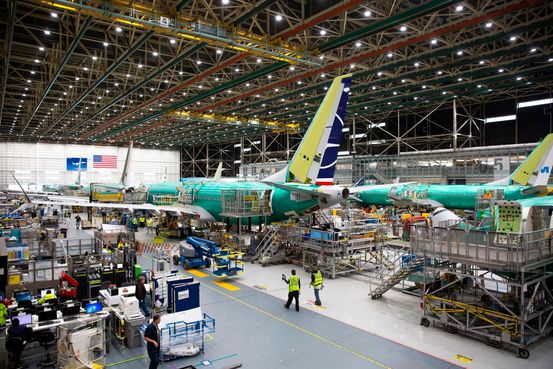 A faster-than-expected recovery in domestic air travel is helping Boeing Co. find new homes for unclaimed 737 MAX jets whose buyers walked away or collapsed during the pandemic.

Some airlines are buying the orphaned jets amid a vaccine-fueled travel rebound in the U.S. and other parts of the world. The purchases have left the Chicago-based plane maker with around 10 stored MAX aircraft needing buyers, people familiar with the matter said. Last July, it counted around 100.

A year ago, airlines were parking planes in deserts and some permanently retired swaths of their fleets as they prepared for a protracted downturn. While many business travelers have yet to return and lucrative international routes are still on pause, domestic air travel has been on an upswing in recent months, U.S. airline executives say.

Flights in the U.S. are 84% full, on average, amid a surge of summer travel. More than two million people passed through U.S. airports on Friday, according to the Transportation Security Administration—a level last reached in March 2020. While previous travel rebounds have been cut short by new waves of infections and restrictions, airline executives are more confident now that the recovery has begun in earnest and their finances have started to stabilize.

Carriers have responded by adding flights, making plans to bring back idled crew and hiring new pilots and flight attendants. They are also starting to expand their fleets.

Major U.S. carriers such as

are among recent buyers of the unclaimed MAX planes. The jets are often referred to as white tails, an industry term for those that aren’t painted in airline colors. The MAX jets in question need to be repainted with their new owners’ liveries.

United said the carrier’s earlier order for 25 MAX jets, announced in March, includes planes from Boeing’s built inventory as well as planes to be produced later. An Alaska Airlines spokeswoman said nine MAX jets it secured in a December deal had been built for other carriers.

Separately, United has been in talks with Boeing about a potential order for as many as 150 additional jets, people familiar with the matter said.

What’s your outlook on Boeing, post-lockdown? Join the conversation below.

Flair Chief Executive Stephen Jones said the 13 previously unclaimed MAX planes the carrier is adding to its fleet will help fuel its growth, aimed at capturing demand as travel recovers. Rather than wait two years or more after placing an order for new planes, Flair can take delivery in a matter of months, he said.

“We can get started very quickly,” Mr. Jones said.

Some Boeing customers are likely to face supply constraints this summer, CEO

said earlier this month. He called the recovery “more robust than I ever imagined.”

said this week that by August, it will be flying roughly as much as it did in the same month in 2019. The airline has added 18 new destinations over the course of the pandemic, including the Thursday announcement of flights to Syracuse, N.Y., this fall.

On Tuesday, Southwest said it would increase its order for a new, smaller version of Boeing’s 737 MAX by 34 planes next year, accelerating plans it unveiled in March to refresh its all-Boeing fleet.

The number of Boeing’s unclaimed MAX aircraft is fluid as airlines in the U.S. and a few other parts of the world increase flying and add to their fleets. Customers typically pay the bulk of a plane’s purchase price at delivery.

The development is helping Boeing move past the pandemic and financial consequences related to two earlier 737 MAX crashes. Some customers have been able to walk away from their newly produced planes without penalties after regulators grounded the aircraft for nearly two years.

Boeing’s push to stop bleeding cash depends heavily on delivering more MAX jets, having delivered about 100 to airlines since December. It had about 400 MAX jets in its overall inventory at the end of March, according to a securities filing. Most delivered jets have gone to U.S. airlines and lining up additional customers for unclaimed planes will help it reach the goal of generating cash next year.

A Boeing spokeswoman said the plane maker was grateful for its customers’ continued confidence in the 737 MAX.

Boeing’s ability to find homes for the MAX jets also highlights the airline industry’s two-speed recovery. High vaccination rates in the U.S. and China helped domestic traffic recover to pre-pandemic levels. The two countries account for two-thirds of the global traffic rebound from last year, according to the International Air Transport Association, a trade group. Airlines in Europe and most of Asia, meanwhile, are struggling to find passengers.

—Doug Cameron contributed to this article.