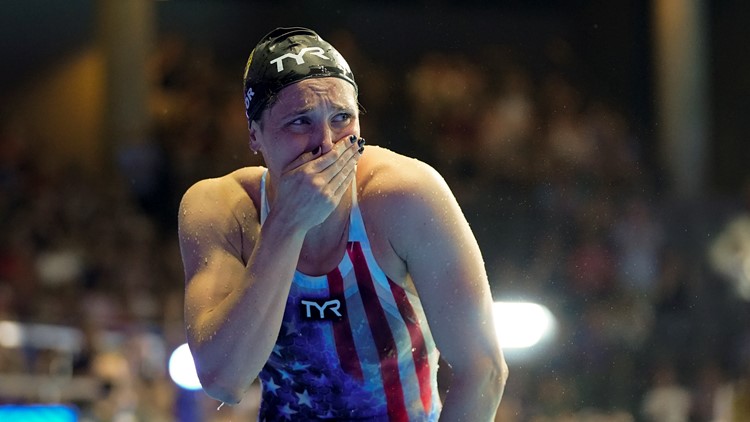 Annie Lazor won the women’s 200-meter breaststroke, swimming next to the teammate who has been at her side since the family tragedy.

Swimmer Annie Lazor slapped the water with emotion Friday as she qualified for her first Olympics, less than two months after suddenly losing her father.

At her side was Lilly King, her training partner, who has been at Lazor’s side ever since the tragedy.

Lazor won the women’s 200-meter breaststroke final with King finishing second. It was Lazor’s final chance to make this year’s team. And at age 26, she’s the oldest first-time U.S. Olympian in swimming in 17 years, according to NBC Sports.

Annie Lazor qualified for the #TokyoOlympics!

And what’s even better is the excitement she shared with her teammate and friend Lilly King. ❤️@USASwimming | #SwimTrials21 x #TokyoOlympics pic.twitter.com/M5Wc8cLkMA

When Annie’s father, David, died at home suddenly on April 25, King did not hesitate. The tough-talking swimmer known for being fierce and intimidating drove five hours to support Lazor.

King promised Lazor’s mom she would do everything she could to make sure Lazor made the Olympic team, NBC said.

Before they climbed atop the starting blocks Friday, King told Lazor in the lane next to her, “I love you. Let’s go get it.”

King had the lead at the halfway mark Friday, but Lazor came up from behind and led the final leg to touch the wall first. Lazor’s winning time was 2:21.07. King, who already qualified for Tokyo after winning the 100-meter breaststroke, finished second at 2:21.75.

Lazor immediately hugged King in the lane next to her before the two put their locked fists up in the air in victory.

Lazor then sat atop the lane divider and slapped the water. Other swimmers came over to hug her.

Annie Lazor lost her father a couple months ago and Lilly King made a promise to Lazor’s mom that she was going to do everything to get her on the U.S. Olympic Team.@USASwimming | #SwimTrials21 x #TokyoOlympics pic.twitter.com/Tcr5IFXN1O

“I just am overcome with emotion. It’s been a long couple of months for me. And I just couldn’t have done it without this girl,” Lazor said afterward.

“We really just wanted to do it together,” she added, referring to King.

You can watch the full race in the YouTube player below.

Namibian Chief who Urged German Re...