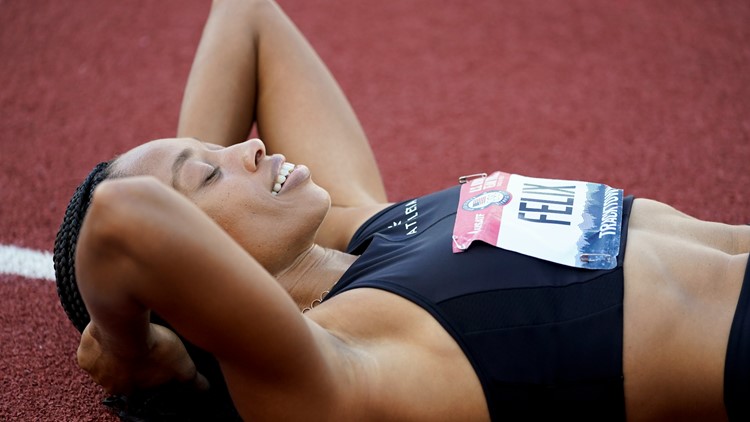 Felix will have a shot this summer to become the most decorated female track athlete in the history of the Olympics.

EUGENE, Ore. — Flat on her back, gasping for breath, Allyson Felix kept her eyes on the scoreboard.

When her name came up in the second spot, she kicked up her heels and covered her face with her hands.

No doubt, this fifth trip to the Olympics is her sweetest.

The 35-year-old mom rallied from fifth at the start of the homestretch to the second-place finish at U.S. track trials to earn the chance to win a 10th Olympic medal and break a tie with Jamaica’s Merlene Ottey as the most decorated female track athlete in the history of the games.

“It has been a fight to get here, and one thing I know how to do is to fight,” Felix said. “I just did it all the way home.”

Running from outside her usual comfort zone, in Lane 8, Felix got off to a fast start and led 100 meters in. Slowly, she lost the lead, lost her grip on the third spot and was fighting just to stay close. But in a closing burst that will likely go down as one her her best, she reeled in half the field. She finished in 50.02 seconds, 0.24 behind Quanera Hayes and 0.01 ahead of Wadeline Jonathas.

“I just wanted to use my experience,” Felix said. “To make a fifth one, it’s so special.”

The Olympics is five weeks away in Tokyo. The road there has been filled with more twists and turns than Felix might’ve imagined two decades ago when she burst onto the scene as America’s fresh-faced sprint star.

They included the difficult birth of her now-2-year-old daughter, Camryn, who spent time in the neonatal intensive-care unit after she was born; and a very pronounced move into advocacy for female athletes in her sport, many of whom had been left on the sideline by sponsors when they became pregnant.

They also included their share of heartbreak on the track: Second-place finishes at the 2004, 2008 and 2016 Games, to say nothing of some close misses in her attempt to qualify at multiple distances, kept her motivated to keep pushing forward.

The COVID-19 pandemic put an even tougher spin on things, costing her a year at a time in her career when every day counts. To make the most of the time, Felix found herself waiting outside her house for coach Bobby Kersee to measure out distances on the street so she could train while tracks and gyms were closed.

If an Olympic trip was all that mattered, you could say the work paid off. But Felix has never been happy just to be there. She’ll have her hands full. Not only with Hayes, but also with the defending champion, Shaunae Miller-Uibo, who dove at the line in Rio de Janeiro to beat Felix by 0.07 seconds.

On Sunday night, Felix celebrated on the track, hanging out with Camryn and with Hayes, who introduced the Felix family to her own youngster, Demetrius. “We’re going to Tokyo,! Felix told the kids.

“Today, I thought about all the things,” Felix said. “Us fighting in the NICU, fighting for my life, fighting on the track.”

New Zealand’s Laurel Hubbard to be...

A Winner Is Crowned In The Season...